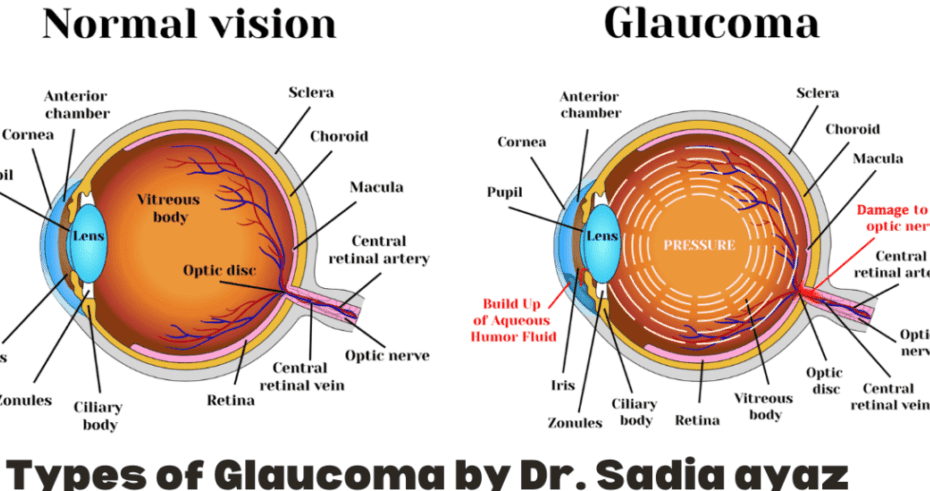 Glaucoma is an irreversible blinding disease in all age groups. The prognosis of glaucoma is defined on the basis of the different types of glaucoma. The early detection and timely commencement of treatment are the key to a better prognosis so that a patient will not become blind in his lifetime.

In glaucoma the optic nerve is damaged along with a reduction in the visual fields in which raised intraocular pressure is the main risk factor. One or both eyes are involved, depending upon the cause. The rise in intraocular pressure will directly/ mechanically or indirectly damage the optic nerve, responsible for signaling the image to the brain.

The majority of the patients develop no symptoms in the early stages. Patients having positive family and risk factors should pay a regular visit to the health professional.

The management plan and signs and symptoms depend upon the type of glaucoma.

What are the different types of glaucoma

Glaucoma may begin in the early stages of life or even

in the intrauterine period.

Depending upon the time of onset, it can be classified as under

the commonest cause of glaucoma.  In POAG there is no contact between iris and trabeculae, hence the angels are open. The main pathology lies when particles of

different types, depending upon the type of glaucoma blocks the trabecular meshwork. The outflow process of aqueous humor is reduced leading to raised intraocular pressure.

The following types of secondary open-angle glaucoma can be defined.

In pseudoexfoliative glaucoma, the amyloid-like extracellular substance is deposited in various tissues of the body including the eye. the material will get deposited in the trabecular meshwork and obstruct the outflow pathway of aqueous humor.

Treatment usually starts with topical medications depending upon the overall health of the patient. Other treatment option includes laser trabeculoplasty and filtration surgery with shunts.

In PDG pigments from the posterior surface of the iris are released. 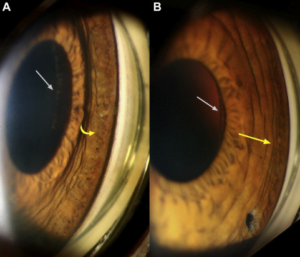 There is deposition of pigments in the anterior chamber and in endothelium and lens. It is common in myopes. The incidence is more in young males.

There is excessive backward bowing of the iris, resulting in constant rubbing again the zonules and hence the release of pigments. It can be precipitated with extensive movements, such as during exercise.

In neovascular glaucoma, the common pathology is related to hypoxia of the retinal tissue which leads to the production of angiogenic factors. The factors induce both retinal and anterior segment neovascularization.

What Is Uveitis Glaucoma

In this type of glaucoma, the raised intraocular pressure is secondary to intraocular inflammation. The cause may include any inflammatory process going on in the eye for example in hyphema cases, there is the attachment of the iris to the trabeculum, and as a result, the pupil may get completely blocked. In other types such as uveitis in the anterior chamber, the cause may be trabeculitis or trabecular meshwork obstruction by the inflammatory substance.

Treatment depends upon the cause.

This type of glaucoma can be divided into the following types

This is a type of open-angle glaucoma due to a hyper-mature cataract. The trabecular meshwork is blocked with high molecular proteins released through the intact capsule of the maturing lens.

It is different from phacoanaphylactic glaucoma, in which there is an immune reaction to the lens proteins with a compromised lens capsule.

Treatment involves medically controlled IOP and later on wash out of the proteaceous material from the anterior chamber.

Phacomorphic glaucoma is secondary angle-closure glaucoma, in this type of glaucoma, the intumescent cataract associated with slacken zonules is pulled anteriorly to block the pupil and cause iris bombe.

The definitive treatment is cataract surgery.

What Is Malignant Glaucoma

In angle-closure glaucoma, the trabecular meshwork is blocked by the peripheral 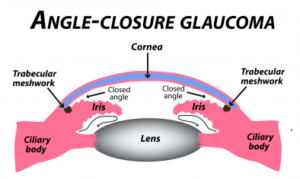 iris, (iridotrabecular contact, ITC). It can be primary, due to an anatomically exposed eye or secondary, due to another ocular or systemic condition.

Age: the average age at presentation is 60 years
Race: it is more common in Far Eastern and Indian Asians.
Gender: females are more commonly affected than males.
Refraction: it is typically common in hypermetropic.
Axial length: short eyes and nanophthalmos have short axial length and are particularly prone to angle closure.

Most of the patients have chronically raised IOP without any symptoms. Common presentation is decreased vision, haloes, blurring, redness, periocular pain, and headache. Others include emotional stress, semi-prone position, cold or flu remedies, and using topiramate and other sulfa drugs.

Which Glaucoma Is Considered a Medical Emergency

Acute angle closure is a medical emergency and steps should be taken to immediately rescue the patient from the prevailing condition.

What Is The Difference Between Open-Angle and Closed-Angle Glaucoma

Patients having a family history of eye or any other associated condition as stated above should receive regular ophthalmic checkups. The early detection of glaucoma will slow the process of damage and hence the person will not become in his lifetime.